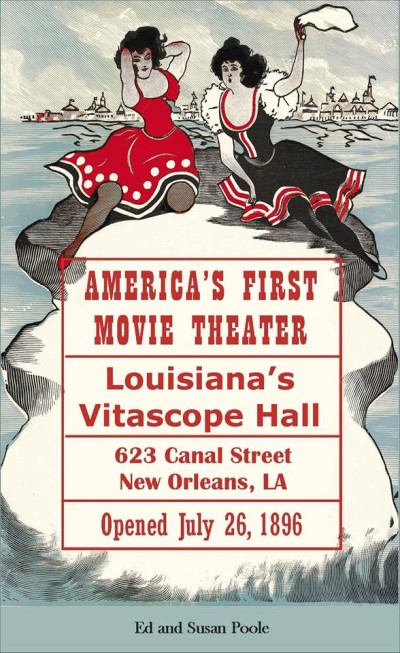 On July 26, 1896, the first movie theater in the United States opened at 623 Canal Street in New Orleans. Admission to the 400-seat theater—basically a showroom fitted with a projector and filled with chairs—was 10 cents. For an additional dime, patrons were afforded a glimpse behind the curtain to see the innovative Edison Vitascope projector that converted still, black and white photos into moving images up to a minute long.

Now, over a century later, Vitascope Hall is finally receiving an historic marker commemorating the location where American theatre-goers got their first glimpses of the technology that added motion to pictures.

Scheduled to take place on October 14, 2019 prior to the opening of New Orleans Film Festival two days later, the marker will provide both locals and visitors an opportunity to stand in the very spot that many consider the birthplace of the movie theater in the nation.

Installation of the marker has been a priority of Ed and Susan Poole, internationally known film historians and archivists, for over 20 years.

“Our original application for the installation of the marker was submitted in 1996, to coincide with the 100th Anniversary of Vitascope Hall,” said Sue. “However, ours was not the first request for such. In our research, we discovered an article in The Times-Picayune calling for an historic marker—that was in 1912. So we’re delighted that this is finally coming to fruition!”

In 2014, the couple met Michael W. Domingue, the Louisiana Department of Culture, Recreation and Tourism’s Recreational Trails Program Administrator, when the two were making a presentation about their book, Hollywood on the Bayou, at the Louisiana Book Festival in Baton Rouge.

“As soon as Ed shared the story of Vitascope Hall, I knew it was the crowning jewel for New Orleans and Louisiana as an important component of Hollywood South,” said Domingue. “We had to make this historical landmark a reality.”

Unfortunately, the application got stuck in the bureaucratic mire waiting for approval. Momentum picked up when Hollywood veteran and Louisiana author Linda Thurman learned about Vitascope Hall and the stalled application process.

“I met Ed and Sue while researching a book about Louisiana’s film industry, Hollywood South: Glamour, Gumbo, and Greed” said Thurman. “When I learned from them that this important piece of history was hiding in plain sight, I wanted to help them in their efforts. It was a story waiting to be told!”